Review of "Laws of Migration" 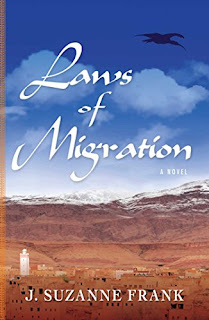 Birds, especially the ibis, have always fascinated Elize--that's why she became an ornithologist. But when her boss at the private Texas coastal institute where she's spent her career gives away her expected promotion, Elize flees to Morocco to lick her wounds and write a research paper that will prove her worth and secure her professional future.

Morocco, with its impressive migration season, exotic flavors, and unwritten rules, is altogether foreign, even if many of the birds are familiar. After a brush with danger, Elize finds herself in Marrakesh, dependent on Erik, a sexy, mysterious stranger who makes her feel alive while opening her eyes to a new, intriguing world. After encountering her ornithology colleagues, who remind Elize of every bad professional choice and missed opportunity, she vows to find the Northern Bald Ibis--an endangered bird few have seen--and impress everyone.

She and Erik journey from coastal paradise to remote desert mountains in search of the birds. Through misadventure, Elize is forced to trust an unknown culture, and through tragedy, she realizes that love and forgiveness are attainable. But first she must surrender her past and its pain to embrace her future and fly free.

For sale at Amazon and Bol.com (loading of the button can be slow, please wait and let me earn some commission)


I do have doves nesting on my balcony but that is all I know of birds. I did not even know all kind of groups of birds have a different name  in English like "a murder of crows". Maybe we do not have that in Dutch. All in all the small facts on birds were interesting to learn. Another plus was how I could recognise the real Morocco in the book. The story is a lovestory but even more that of someone whose life had been an emotional desert who slowly - with a lot of references to birds- starts to function living in and enjoying groups. To live, to feel, to be happy. At first one suspects it to be a dreadful chicklit romp but the story gets better after awhile. 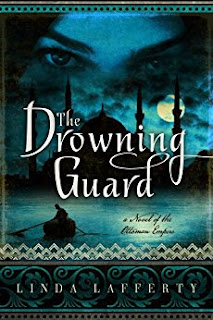 When the sister of the sultan starts to smell decay everywhere her physician suspects it is guilt making her mind ill. What would not be surprising as as she is renowned as the woman who drowns her lovers in the Bosporus The old Christian doctor recommends a confessor. Who better then the executioner. And so nights of storytelling like in 1001 night start. But is she really such a vile person?
I liked the psychology of the first part. But had problems seeing her as a hero because she knew what would happen and still acted as a bitch in heath. Apparently it is based on a historical woman and a good read however some elements sound very unrealistic and fantastic to me.

----
Each morning in the hour before dawn, a silent boat launches on the Bosphorous, moving swiftly into the deepest part of the waters halfway between Europe and Asia, where a man will die…

The Drowning Guard is the tale of the Ottoman princess, Esma Sultan—one of the most powerful women in Ottoman history and unlike any other woman in the Islamic world. In a gender reversal of Scheherazade in 1001 Arabian Nights, Esma seduces a different Christian lover each night, only to have him drowned in the morning. The Sultaness's true passion burns only for the Christian-born soldier charged with carrying out the brutal nightly death sentence: her drowning guard, Ivan Postivich.

The Drowning Guard explores the riddle of Esma—who is at once a murderer and a champion and liberator of women—and the man who loves her in spite of her horrifying crimes. This textured historical novel, set in the opulence and squalor of Istanbul in 1826, is woven with the complexity and consequences of love.
(AMAZON)

VIA AMAZON AND BOL.COM (loading takes awhile, be patient)

Review of 'Ottoman the epic rise and fall of Constantinople" 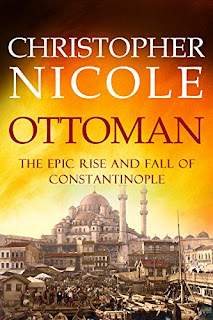 Hawkwood one of the first artillerist moves to Byzantium to offer his knowledge to the Emperor. However he ends up fighting for the Ottoman sultan and so will his descendants for the next 200 years.
Great story that starts with Mehmet Fati who conquers Constantinople and ends with Selim the Sot.

A city where East meets West in a glittering display of culture and power.


English master-gunner John Hawkwood uproots his family from their native land and journeys to this fabled city.

With the city under threat by the Ottoman Turks, the Byzantine emperor is in desperate need of men like Hawkwood and the knowledge of cannon and gunpowder he brings.

For a time, the Hawkwoods enjoy status and privilege in return for John’s superior abilities as an artillerist.

But all good things must come to an end.

When tragedy strikes, even the close relationship John shares with the emperor cannot absolve the family of their sins, and with little more than the clothes on their backs, the Hawkwoods flee Constantinople.

Captured by the savage Turks, John Hawkwood swiftly changes his allegiance, and once more applies his considerable skills…this time serving the conquerors in their victorious surge across eastern Europe and Mediterranean shores.

No man lives forever, but the Hawkwood line never dies.

For five generations, the Hawkwood men serve their Turkish leaders faithfully as military leaders and envoys.

Although showered with wealth and privilege and accorded honours commensurate with their rank, their fates lie in the often capricious hands of the Ottoman empire’s cruel leaders.

Over a span of nearly one hundred and fifty years, the Hawkwoods must employ every ounce of political cunning they possess to survive the swirling intrigues and bloody massacres that dominate the world in which they live.

For their wives and concubines, the uncertainties and dangers of life are no less severe: the punishment meted out to a Hawkwood man who fails his duty likewise falls upon his family.

Beyond the gleaming wealth and the veneer of power lie grim spectres of betrayal and sudden death, the threat of ravishment and torture lurking behind the gilded pillars of their palaces and harems.

And when the time comes to choose between Ottoman and Hawkwood, no one can say what the future might bring…
(source Amazon)