This story gives you two books for the price of one: a romance sugarstory followed by an historical adventure tale of war and rebellion

The book starts as a romance novel and by the time you think the story is about to end you are only halfway and the now happily married couple now plunges in a historical adventure novel with evil rulers, treason, prisonbreaks and a happy marriage.

It is the 14th century in England and the assumed gay king is a weak person letting his favourite man rule the country. Law and order are a distant memory. Kit is the illegitimate daughter of a lower nobleman who is forced to marry a lowly knight because her half-sister, who was the intended bride, did a runner. The half-sister slept with the overlord of the knight and the idea was to compensate her like this. Kit does not want to pretend she is Katherine but is left no choice.   That is the plot of the romance part of the book.

Regarding to the adventure story that follows this: Sir Adam is bound to his liege lord Lord Roger Mortimer an important lord of the realm. Nowadays we picture a lord of the manor as a wealthy family living in a big mansion in the middle of a village but in 14th century England that manor was just a big farm. The knights are like army officers and their farmhands the soldiers the overlord can call upon. It does not matter if the knight agrees with his overlord he is honour bound. In Adam's case that is even more so because Lord Mortimer saved him as a child. This pledge of loyalty however is also a way to protect the less powerful of society. When Adam becomes young Edward's man he cannot be openly opposed by Despenser anymore.

I liked the historic setting. I would loved to have seen that proceed a bit faster (I know what will happen and wanted to have it over with - and see if the hot poker in the arse of someone would feature) but discovered the writer wants to write more about the family in other books to follow. However that made the story sometimes a bit slow.

The book features a lot of bedding but apart from mentioning hard objects trusted it is not pornographic. However combined with also some violent deaths I would recommend readers to be at least 16.

Reviewed for NetGalley. Very friendly priced Kindle. It is really worth the 99 cents.

In 1911 the new British king is about to visit India. It is the first time that a British king and Indian emperor will visit his jewel in the crown. For the occasion a durbar is set up. For me as a European it sounds a bit like the World Expo I once visited: a huge area where every Indian kingdom has a piece of land to erect a pavilion and other tents on where they can present themselves combined with an area for the British.

Just a few days before the monarch will arrive a dead dancing girl is discovered in the Royal Pavilion. A visiting maharaja who likes to do a bit of sleuthing is asked to solve the case before the whole event is ruined by a big scandal. Maharaja Sikander Singh of Rajpore tries to track down all the girl's visitors and interviews them. They are followed by other suspects that are suggested by those people. This results in him speaking to many Indian princes and quite a few Brits.

I discovered while reading that most of the people getting interviewed were real people. Thus the writer describes a scala of interesting historical figures from India's past. For me as a non-Indian and non-Brit that caused me a lot of expeditions into Wikipedia. A Spanish flamenco dancer who married a Raja? Yes it really happened. Battenberg? Mount Batten?

Unlike many books set during the Raj discrimination is not that much of an issue. Maybe because most people the Maharaja encounters are fellow Indians.

The book is a Miss Marple, Hercule Poirot style of mystery with the culprit flushed out in the end and to me it sounds very British. But is is written by an Indian writer who is famous as the writer of graphic novels.

Sometimes the detective part of the story becomes a bit slow and the maharaja's are introduced a bit formulaic (X, a state in the... of India as big as (European country), entitled to a .. gun salute, the royal family originates from), exactly that history lesson makes the book so interesting to read. All the words of that era help to give you the real feel of the period.

I really liked what Sikander says to Captain Campbell  who is rumoured the be the bastard of the uncle of the king and despised because of that. The man is humiliated at a certain moment and then Sikander points him to the fact that he is a descendant of a very noble family: his Scottish mother's family that is who were warrior princes when the British king's family were stil sheepherders in Bavaria (eeehm Hanover is in the middle of Germany and Bavaria in the south but....)

Although at first the solitary Indian ruler hates to see himself forced to be accompanied by the smiling optimistic side kick during their job he grows fond of the man.

A book that makes you think WOW WOW and WOW. "King's company" - teenagers struggle during the days of England's Anarchy

This book transports you back in time. You smell the stink of the rushes on the floors, see how the rich tapestries are moulding because the walls are so damp and you realise a knight was just a farmer who owned a manor and could wield a sword unlike his Saxons fieldworkers and who was a soldier his overlord could trust to come when needed. To your surprise the castles are not the French stone keeps you remember but just a kind of hill forts with a wooden palisade and a few thatched roofed buildings inside. It also surprised me how the Saxon era was forgotten in two generations. I can understand that people had no clue what prehistoric burial mounds were but something so recent!

The book is set during the Anarchy. 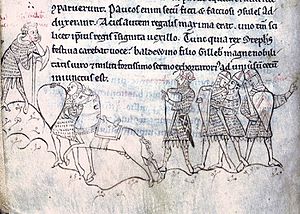 "The Anarchy was a civil war in England and Normandy between 1135 and 1153, which resulted in a widespread breakdown in law and order. The conflict was a succession crisis precipitated by the accidental death of William Adelin, the only legitimate son of Henry I, in 1120. Henry's attempts to install his daughter, the Empress Matilda, as his successor were unsuccessful and on Henry's death in 1135, his nephew Stephen of Blois seized the throne with the help of Stephen's brother, Henry of Blois, Bishop of Winchester. Stephen's early reign was marked by fierce fighting with English barons, rebellious Welsh leaders and Scottish invaders. Following a major rebellion in the south-west of England, Matilda invaded in 1139 with the help of her half-brother, Robert of Gloucester." (Wikipedia)

In the book we meet William and his two brothers and one sister who live on a Norman farm in the south of England. Their father just died fighting for the king as a knight and their mother suffers from depression due to loosing her husband. The siblings are all between 14 and I guess 18 as none is yet married. Although they are descendants from the Norman invaders who came to England two generations ago and they belong to minor nobility they suffer severe hunger during the winters and have to fear for bandits.

Two visitors arrive at the farm. An old uncle returning from the Crusades with stories to tell and guidance for the children and a young man from France who is waiting, he says, for a book the nuns are copying for his family who will train William. Life gets a bit less gloomy.

But then all of a sudden William finds himself in the middle of the civil war.

I can certainly recommend the book to everyone from 14 and up. A young person will enjoy the adventure of a group of people his own age and we the older ones will be enthralled by this tale of the past.

It is 1725. A young 11-year old girl travels with her father to his new posting in the Spanish colonies. She is completely fascinated by her book full of pirate stories. So when their ship is attacked by a French privateer she sees it as a big adventure. Privateers by the way were privately outfitted ships that where officially allowed to attack the country a country was at war with. That enabled a king to enlarge his power at sea without having to pay a dime. No he would get a share of the spoils.

Maribel wants to join the crew and turn privateer. Lucky for her the men are nice people who would not lift a finger towards a nice looking girl. No raping or hitting. She ends up with quite a crush for the dashing captain.

This part of the story is endearing and funny. You can imagine how a teenager would see a big adventure but the moments the canons blast death and destruction almost pees herself.

That and also the fact that it is a clean story without sexscenes makes it a story also readable for the younger readers.

The first like 70 percent of the story I liked very much. However when Maribel grows up the writer adds elements to the story I did not like that much. The plot was too artificial and too fast paced there.

For instance when someone drowns near an ship in an empty see and the captain sees that person drown: blub...blub,... sinks under the waves, that guy would not end up getting a ride from a magic submarine on the bottom of the ocean. And even when he would swim to the other side of the ship by diving under it then he would not have a change to survive by swimming in an empty sea.
She also give the captain a kind of saintly heroism.
The title also gives away the end of the story.

So the first half would be a real 5 star but the last part brings it down to 3.


This was one of my ARC reviews for Netgalley.

A comic book review by someone who never reads comics: Eleanor and the Egret 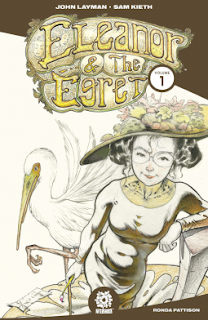 Well that is not completely correct as I do have a subscription on the Donald Duck and own a lot of Suske and Wiskes but I hardly ever read a comic book for grown ups. The early 1900-design and the story synopsis that is what about art thievery however made me pick exactly this comic book to write a review about it.

It is beautifully done with all kind of 1900 (Art Nouveau (?) ) elements in the drawing.

It made me wonder in the beginning what time period is was supposed to be in. One moment a guy in a hat and suit oozing 1900 walks in, the next moment Eleanor is wearing Uggs.

But it seems to be a kind of fantasy Paris or alternative Paris as this review voiced it:  https://www.hollywoodreporter.com/heat-vision/why-eleanor-egret-is-perfect-title-new-comic-book-fans-992141

Interesting to see was that most characters were accompanied by a pet what represented their personality (influence of Native American spirit animals?).

However to me the book was something like looking at a beautiful picture and not totally getting what it was about. A bird who feeds on art, a kind of art succubus who steals people's talents? And the end left me with many questions. Maybe that is part of the charm.