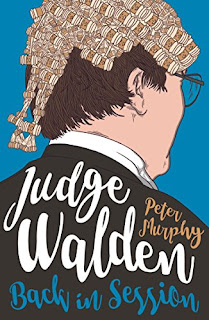 Like in "Judge John Deed" Judge Walden is presiding over several cases that are told as a series of short stories. I understand that plans are in progress to turn this novel and it's predecessor into a tv-series as well.

Judge Walden is the RJ (the presiding judge we would call that in The Netherlands, the legal boss of the court) of a small court in a not so wealthy part of London. With three other judges he has to rule on all kind of cases while in the meantime being annoyed by "the grey smoothies" from the government who hassle him about costs and have the most brilliant but unworkable ideas. Charles Walden is married to the reverent mrs Walden and over dinners with supermarket wine they discuss their days.

For someone who is a lawyer and who worked herself at a district court, some of the things mentioned are "a feast of recognition" as we would say in my country. The red tape, the money problems, the brilliance of some lawyers, the judges having lunch at the "judges table". As the novel is written by someone who was a judge and counsel at the Yugoslavia Tribunal I trust the stories are legally accurate.

There are some style elements resurfacing in each story: The lunch that is 'an oasis in a desert of chaos', the hated but always mentioned 'dish of the day', the always mentioned dinner flooded with supermarket wine that is described as if it is a real old vintage dug up from a wine cellar.

For me it took quite as while to finish the book. Maybe because after a day of legal work a book about court proceedings is less diverting then a bodice ripper or a time travel adventure when I am reading in bed. But it is also the effect of the novel being in fact a series of short stories: after finishing one I put the book away for something else to return to it when I had finished the other book. The stories might even work better as a weekly tv-series.

Nevertheless an good read if you like courtroomdrama's or have an interest in legal matters.
op 11:34:00