REVIEW of novel set in pre-Taliban Afghanistan. Very impressed by this insiders account 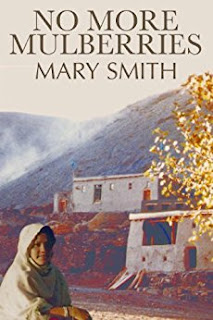 When you stop your car at a truckstop so you can read a bit more a book is really interesting!

I am NOT going to tell too much of the story as essential in that story is the past getting revealed bit by bit.

At the beginning of the novel we meet Scottish Miriam married to a doctor in rural Afghanistan. He is her second husband and things are less happy than they seemed at first. Bit by bit we get to know her history and that of her husband.

It is clear the writer knows - later I discovered she indeed has firsthand experience- Afghanistan.

As I met people from Afghanistan in the 90ties when I worked with refugees I was really interested in the cultural background of the story. But the author is a blessed storyteller as well. Miriam really seems real. And you hope nothing bad will happen to her. The mentioning of Dumfries made me smile. Not many people around where I live will know that small Scottish town but I have a friend who lives there and I guess she might even know the writer.

AMAZON writes: "Scottish-born midwife, Miriam loves her work at a health clinic in rural Afghanistan and the warmth and humour of her women friends in the village, but she can no longer ignore the cracks appearing in her marriage. Her doctor husband has changed from the loving, easy-going man she married and she fears he regrets taking on a widow with a young son, who seems determined to remain distant from his stepfather."

At first, what struck me most about this highly descriptive, lyrically written, “No More Mulberries,” was the author’s ability to completely transport me back to the faraway country of 1990s Afghanistan, not only geographically, but also culturally, and ideologically. It’s a country where ‘saving face’ is the order of the day, where its population is rapidly falling victim to the Taliban, and where primitive beliefs are so pervasive, that a child with leprosy is almost drowned by his father, in order to ‘kill’ the disease. In addition, Smith shows us––through the eyes of the ‘outsider’ widow Miriam from Scotland, her second Afghani husband, and their children––that there’s another side to this land; how the people are so gracious and hospitable that offering one’s home and food to strangers is a given, and not accepting a dinner invitation is tantamount to receiving a slap in the face.

But ultimately, what held me captive was the slow, unwinding mystery being played out of how Miriam’s first husband died, and what brought her to her second husband. Although the clash of cultures is often painful, confusing, and palpable, Smith confirms that in the end, no matter where we’re from, no matter the hardships in where we’ve landed, if we are truly willing to be honest with ourselves, the rest will undoubtedly fall into place. Definitely recommend!"

Here for sale at AMAZON: http://amzn.to/2wprF32


USING THOSE LINKS FUNDS MY READING

FOR PEOPLE WITHOUT A KINDLE E-READER : WITH THE FREE APP YOU CAN READ KINDLE BOOKS ON YOUR PHONE OR PC

FOR PEOPLE WHO HAVE AN E-READER WITH THE OTHER SYSTEM GO TO BOL.COM WITH THIS LINK