Review of The Seed Woman by Petra Durst-Benning 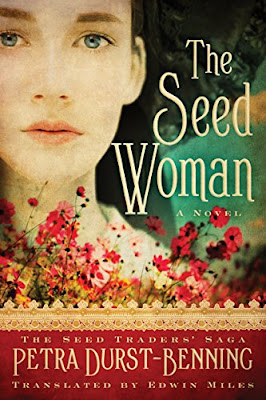 This is a novel http://amzn.to/2vxUNGN what we call in The Netherlands a "streekroman" - a traditional family chronicle set in a rural area in an era in the past. Not my normal pick in novels. But I was attracted by the cover of the book.


The book is written by a German author and is set mostly in a small village Gönningen in the south of Germany around 1850 but some parts take place in Odessa and in the Dutch bulb growing area. The village is famous for it's seed trading. The men and also many women of the village travel all over Europe to sell vegetable and flower seeds to farmers and estates.

It is a few days before Christmas when a young woman, the daughter of an innkeeper from Neurenberg, arrives in the village. She states that she is pregnant and the father is the son of the richest trader in town. That same son is supposed to marry the townbeauty Seraphine on the 6th of January. Seraphina whose father is missing and who grew up in poverty and who is longing for her fate to be wed to such a catch. Who has been sowing her weddingdress for months.

While at first I was all too sympathetic with Seraphine, having been dumped with heartbreak myself in my own youth, I more and more started to really dislike her. And wished that Helmut and his family grew some balls. Who would want to stand such war and then even in your own house? Why not move away when there are trading opportunities in Russia and America? She is totally obsessed and maybe crazy. What due to the two traumatic events at the start of the novel is not that far fetched..I really doubt if remorse would be able to cure that. It made me wonder if all the other familymembers were daft.

The historical background of the story was interesting. I would like to suggest to the writer to put the historical explanation at the start of the book so the readers will realise all that is more or less correct and no fantasy.

What I found difficult is that the seed woman is Hannah but large parts of the book are about the brothers and others about Seraphine. That makes it harder to identify with one person in the novel.

It was a nice surprise to see the area I live in in Holland suddenly feature in a German book mainly set in Germany. The sandy soil for the bulbs, the "helmgras" (sand reed) on the sanddunes on the seashore.

Original title in German "Die Samenhändlerin" what means the lady who trades in seeds.


On Amazon:
"From bestselling author Petra Durst-Benning comes a sweeping emotional story of courage, triumph, and love against all odds in nineteenth-century Germany.

After a long and trying journey from her home, Hannah arrives at a charming village nestled in the foothills of the Swabian Mountains, eager to find Helmut Kerner, a traveling seed merchant she loved and lost. Enchanted by the glorious wildflowers and thriving harvests stretching as far as the eye can see, Hannah feels less like an outsider with each passing hour, until she meets Seraphine, an ethereally beautiful dreamer engaged to be married to Helmut, the father of Hannah’s unborn child.
Desperate to win back Helmut’s affections, Hannah gets to work and quickly discovers a passion for the seed trade, and with every change of season comes a change of heart. Can Hannah and Seraphine put aside their differences to find a way to work together, or will Hannah and her child be forced to leave this place she has come to love?"

Or you want to read it in its original language?