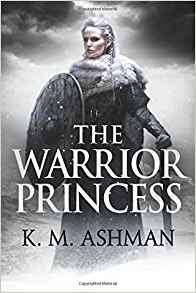 Thanks to Outlander en Braveheart even we non-British people know the stories of the Scottish rebellions. However to me the Welsh rebellion was totally unknown. A few weeks ago I read a simple romance novel in which the heroine's mother wanted her to be a second Gwenllian. The first Gwenllian was apparently some freedom fighter who was still remembered in the Welsh battlecry. I thought all of that was fiction till all of a sudden the book Netgalley asked me to review was about exactly that Gwenllian. First thing I did was check Wikipedia. Yes she was a historical figure. No do not check before you have read the book as the tale is as historically correct as possible and checking a history book will spoil the suspense of the story!

It is less then 100 years after the Normans under William the Conqueror aka the Bastard have invaded England. But even now they have their claws in the Wales territory and have occupied some of the principalities/kingdoms while others are still free. Princess Gwenllian and her husband prince Gruffydd ap Rhys alias Tarw of Deheubarth had been fighting the English invaders but have disappeared / died a decade before. The sister of the prince is happily married to a Norman knight who holds one of the big English castles in the area, Pembroke.

All seems more or less peaceful but then the English king dies, the son of the steward of Llandeilo is arrested for rebelling against the English and the second man of castle Pembroke has plans of his own. In a few months time the area is knees deep in a civil war.

The book is a fascinating read for people who are interested in history and people who like to read about military campaigns. Because it is done as a novel it reads a lot better than when done as an article.

What surprised me to see was how much European (continental) influence there was in the conquest of Wales. Flemish knights, mercenaries from Saxony and I read somewhere also many Flemish immigrants sent there to colonise Wales. EU migration 1000 years early. It also made me wonder why the Normans rather had foreigners there than trying to conquer the Welsh hearts. I mean England did not have that much of a problem with them unless we have to believe Ivanho.

While we more or less see what happens to all the players in the book from a birds eye perspective, that does prevent a bit to form a strong connection with the individuals. It is more their acts than their thoughts we read about.

When you have finished do go to Wiki and see what happened with the ones who are still alive at the end of the book. The author did explain the historical facts at the end. Maybe he should have also added a little bit of an historical epilogue. I liked the successtory of son Rhys.

Not a book you finish in a day.

Five out of five stars. Really recommend it.

This is what Amazon wrote:

1135 AD. Wales is a broken land. Many of its true-born rulers are in hiding, or married into noble English families. But, though low and dim, a flame of vengeance still burns…
In the southern kingdom of Deheubarth, Gerald of Windsor governs. Firm but fair, he commands the respect of those he reigns over, and the love of Nesta, his wife.
But then treachery strikes from the heart of the English ranks and peace and stability are quickly forgotten. Nesta, daughter of a long-dead prince, is more than what she seems. And when her family is threatened, she takes drastic action to protect it…
In the mountainous rebel heartland of Cantref Mawr, the Welsh resistance has found a new figurehead: a fearless warrior, born with a sword in her hand, and with vengeance in her heart.
The Warrior Princess is coming. And the English will know fear.
op 16:08:00