Free classic Four feathers: "Fear is not lack of courage. Courage is willingness to do what needs to be done regardless of fear"

Mason's 1902 classic adventure about British army officer Harry Feversham's endeavour to overcome the false label of "coward". Four times filmed.  I saw the movie years ago. The book is a joy to read. You do not see that the writing is over a century old.

As a young boy Harry is present during the Crimean War Veteran dinners at his father's estate. The former officers are discussing people who were cowards in battle. When years later Harry himself is an officer and newly engaged he all of a sudden resigns his commission while the next days his regiment is ordered off to the Sudan. People become aware he had prior knowledge and they send him white feathers to brand him a coward. His fiancée adds one of her own before breaking off their engagement. 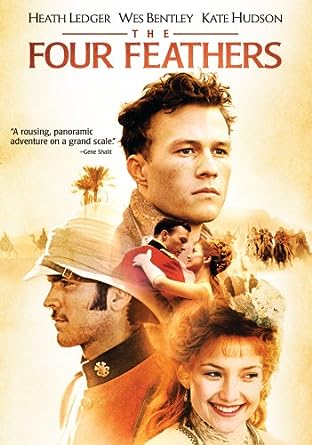 Harry has a conversation with one of the Crimean officers who ensures him that fear to die in battle is not cowardice but using your brain and that being afraid would not mean one would not do something heroic. Courage is not the lack of fear - but the willingness to do what needs to be done regardless of fear. Harry was afraid he would damage the good reputation of his father and Ethne if he ever would show fear like the guys had done in his dad's war comrade's tales.

While the movie with Heath Ledger focussed on the adventures of Harry the book evolves around his former fiancée Ethne. She is now courted by Harry's friend Durrance but realises she is still in love with Harry although no one has ever heard from him again. She realises that she has been too harsh on Harry and feels like she destroyed his life. Then Durrance goes blind and Ethne accepts his marriage proposal because she does not want his life to be destroyed as well.

In the meantime tales reach her from Sudan that Harry is saving the men who accused him and does deeds more courageous than would ever have been expected from him. He seems to want to redeem himself and erase the past.

So what will happen now? Will Harry survive? But what of his best friend who is about to marry the love of his life?

Good psychology and adventure. Old fashioned honour. Writing style feels very modern. Very different from the movie. A theme set in a story written just after the Sudan war and during the Boer War I believe. An era where the military power of Great Britain was still a lifestyle. CAn really recommend.