On the eve of the surrender of Japan and thus the end of the second World War, three man are sitting toasting in a small village deep into China. One is an American Missionary who is almost 40, the others are almost half his age. One is an American soldier sent there to train Chinese recruits, the other is one of those Chinese who became an expert marksman. They make a solemn vow: when they will die their ghost will return to the village on the anniversary of this victory and wait for the other ghosts.

Soon after one of the ghosts arrives but it takes many decades until the friends are reunited again. They realise that a forth person is missing: the girl they all loved in their own special way. (I think as a father figure, a bosom friend and a lover)  They start to tell each other about their lives.

Most time is spend on the life of the young Chinese soldier thus creating the recent history of China. From the days that rural villages had only one scribe and people lacked decent shoes to a son in law who are now professors in America. That is maybe also because the book is written by someone originally from China.

It is translated from the original Chinese into English but the language still oozes foreign origins. Some sentences are real jewels

Although the part told by the dogs is sweet but it does not fit into the concept of a meeting in the 21st century as the dogs tell their ghost story in 1945.

I liked the glimpse into a for me foreign culture and a historic era. The story is divided amongst several people what makes it less easy to identify with one but I liked the Chinese soldier most. It is beautifully written and I liked the ending.

A story you will remember.

Reviewed this novel for Netgalley. It will be published 01 Oct 2020. 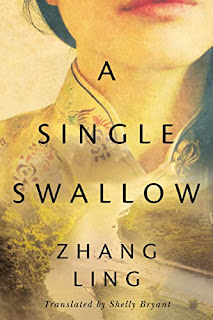