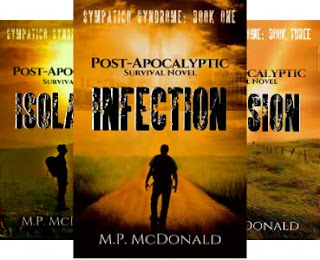 Cole is a widowed epidemiologist who has retired from the army and is now renovating houses. His son is in college and his brother and sister-in-law live nearby with their son and daughter.

One day he gets a phonecall from a co-worker he battled ebola with in Africa called Elly. She warns him a virus has escaped a navy lab on an island and that she expects that 95% of the world population will be dying from it in the coming week. So he best bunkers down somewhere save but only to warn the people dear to him as otherwise the chaos will make his survival hopeless too.

Cole decides to try to reach the island he has inherited in Lake Michigan and warns his family members to go there too.

The story is with our COVID experience still going on quite eerie and familiar. But the first novel was written in 2016!


Some of the group survive the outbreak and survive a cold winter in an idyllic spot so I was flabbergasted when Cole thought it necessary to leave there. And that is when the author shows how good she is as most writers will just let their survivors scavenge and farm.

Cole realises that his group survives but when they will not act they will condemn their children and future grandchildren to a medieval life in a very small group. Now food is still available in shops and cars and petrol still works he wants to take them to a place he expects more people flocking to and what has better facilities to rebuild a form of modern life. (I only wondered if the soil conditions there would be good enough to raise plenty of crops but I have never been there).

The female author is brilliant in worldbuilding and you get the feeling you really know the main characters. She is also good in the psychological thinking of how people would act and what you should do to persuade them.

I was sorry there was no part 4. I can really recommend the series. While the first 2 novels are 4 stars the last is 5 out of 5.