The USA after nuclear bombs detonated in mayor cities. Review of "Through many fires" 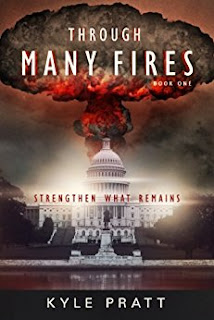 Through Many Fires (Strengthen What Remains Book 1) Kindle Edition

by Kyle Pratt (Author), Micah Hansen (Illustrator)
(Amazon)
Terrorists smuggle a nuclear bomb into Washington D.C. and detonate it during the State of the Union Address. Army veteran and congressional staffer Caden Westmore is in nearby Bethesda and watches as a mushroom cloud grows over the capital. The next day, as he drives away from the still burning city, he learns that another city has been destroyed and then another. America is under siege. Panic ensues and society starts to unravel.
This book is part 1 of a 3 book series but can be read as a stand alone although I would like to know who is behind the attack because in book 1 strong suspicion grows. We follow Caden at first en route to his fiancee but later on his way to his parent's farm in Washington state. Food is getting low, same as petrol. What is a bit suprising as Mexico and Canada are not hit but only some big cities. However with most of the governmental hot shots dead and lots of people on the run that is more then enough for chaos. While reading you start to suspect one country and one leader to have created the chaos. Nice relaxing read for people who like "End of the world"  stories. The author has a pleasant prose.