Review of "The good lawyer, a novel" by Thomas Benigno 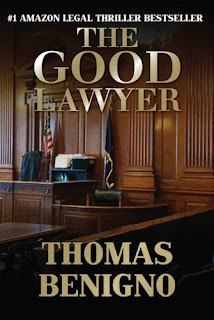 The Good Lawyer: A Novel

I am a lawyer myself. But not practicing criminal law and working in a non-USA legal system. But this novel fascinated me. As it is written by a real lawyer it felt like looking into the real world of an USA attorney.

This book is not a fast and easy read John Grisham-style "airport novel" but a novel that deals with the coming of age of a young and idealistic lawyer who enjoys winning cases but more and more comes to realize these cases are about real human beings.

What to do when your conscience starts to interfere with your legal ethics? Who is good and who is bad and are bad people sometimes the good guys? And can you just keep looking at things like a bystander.

I thought it a very well written and "layered" story that I would happily read again and certainly would recommend to others.


(AMAZON)
INSPIRED BY A TRUE STORY.
A young, ambitious lawyer is eager to prove he is better than the mobster dominated family he grew up in. Working as a Bronx Legal Aid Attorney he learns how to twist the system, how to become an unbeatable defense lawyer. But it's 1982. The Spiderman rapist is on the loose and New York City is a city in fear. When an outraged victim commits suicide right before his eyes, searching for absolution and determined to prove his client's innocence, he knocks the pegs out from under the prosecution's case. Digging deeper, horrifying revelations about his family's past collide with the true identity of the sadistic sociopath behind the real Spiderman's rampage. In the process, this good lawyer comes face-to-face with his greatest conflict and deepest fear: to win, really win, must he sacrifice every principle he believes in and embrace his family's mafia past to become judge, jury, and executioner?