Maybe not the book a lady should admit she has read..... but it was a fun read. Review of "Sold! A Romance in the Sudan" 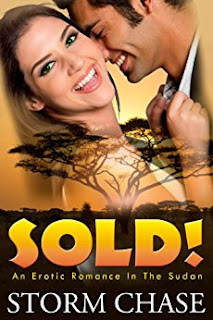 Sold! A Romance in the Sudan

by Storm Chase (Author)
What a nice story. Instead of the expected and rather boring "Western woman gets kidnapped and sold to a sheikh-story", this is a tale that keeps surprising you and has you many times laughing aloud all the while giving you the impression as if the author really knows the area the story is set in.
What I also liked was that here her Western background and his background are exactly opposite of what one would expect.

In the beginning it all seems to go like many of these romance stories go. She is put up for sale and the native guy who is a descendant of a famous slave trader buys her even telling her he is her master (well at least that is what she thinks he says).

But then differences show up:
- The people auctioning her are renting her for a quick sexual act. He steps in to save her and thinks he will see his money returned with profit is he ransoms her back to her family.
- You think he is a slave trader or some warlord or anything but he turns out to have a total different occupation;
- The slavetraders are gays. "Oh I heart noises at night but thought those were monkeys".
- When he saves her she is so ill with malaria he has to do his best to save her life and takes care of her. He runs over checkpoints and scares the hell out of an exiled Libyan doctor by barging in on the old man with a rifle thinking he is persuading the man with his moneyoffer while the guy is s***less due to the rifle.
- In no way he forces himself onto her while he has to wash and take care of her for a long time but their attraction grows and when they do end up in bed it is her the virgin who takes most of the initiative;
- As it turns out she has no family or anybody who would pay any ransom for her but he cannot care less as he likes her and this means she does not have to leave;
- When she finds herself suddenly married to him you expect him to now to want to keep her there by some trick but he is thinking instead he can send her to college is she likes that and maybe one day will come back to him.

What is also nice to read are the cultural issues as many of these kind of books do not deal at all with them because their authors do not know of them.

- The author shows how alike people can be but also how exactly the opposite of what people think they would do culturewise our prejudice would make us believe. She having an abusive father who had ladyfriends while his father loved his English newest wife (It is not clear if she was there originally out of her free will) so much he sent all his haremladies packing. But both his stepmother and her father die from grief when their husband/wife dies.
- When she asks him what he would like her to do he wishes for her to make him brownies like his beloved English stepmother used to make him when he was small. As a reader you expect him to ask something completely different;
- She is upsetting his servants by cooking him breakfast or weeding a flowerpot. It had me in stitches;
- When his sisters offer her a job she asks him if he is ok with that and he answers she never has to ask him permission to do something.

I really recommend buying the book. It is unfortunately not a very long one but also not expensive. It had me smiling a lot and as a reader you fall completely in love with Hafiq.
op 19:51:00