Review of " East India" - the nightmare of a shipwrecked group 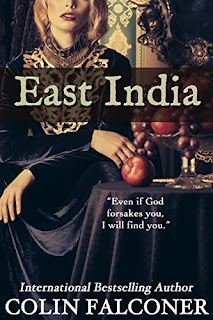 Some of you might have had to read "Lord of the Flies" for English literature lessons in the past. In that book a plane crashes on a tropical island and only a bunch of boarding school boys survive. Before you know it they turn into brutal savages and murder is rampant.

Here in this book we see more or less the same. The writer used a real foundering of a Dutch merchantman on a Australian reef and the horrendous aftermath as inspiration but explains that he made it into a novel because if he used the real events he had no artistic freedom.

The main character is well-to-do Cornelia Noorstrandt who travels to the Dutch Indies to meet up with her husband. But en route the passengers and crew are played against each other by a passenger. The general conditions are not that comfortable as well. Tensions rise and mutiny is just a breath away. And then the ship hits the Houtman rocks! Although most of the people survive the the problems start for real. Hardly any food or water and a captain who abandons them to sail to Batavia.

The story has you glued to your book for days and has you shivering. But I think the description on Amazon makes it sound like a love story while it is more a story like Lord of the Flies in showing how thin the veneer of civilisation is.

A good story but what a terrible tale!

I also had the feeling that some of the old Dutch words used in the book were not correct. Something that sounds as "verdedigers" is translated as diggers what was a nickname of Australian soldiers in WW1 and means someone who digs but the Dutch word verdediger means "defender". Also the captain calls his mistress Soetecut what is translated as "sweetcunt" but I wonder if not the word "Soeteke" was meant what was an endearment used in the past and meant something like sweetheart. I cannot imagine even a sailor telling his girl in public she is a sweetcunt.

If you want to buy the book or read it with Amazon Kindle Unlimited just click on the small picture with the price in this blogposts.

In any other circumstance but shipwreck, rape and murder, a man like Michiel van Texel would never have met a fine lady such as Cornelia Noorstrandt.

He was just a soldier, a sergeant in the Dutch East India company’s army, on his way from Amsterdam to the Indies to fight the Mataram. Such a woman was far above the likes of him.

But both their destinies intertwine far away from Holland, on some god-forsaken islands near the Great Southland. When their great ship, the Utrecht, founders far from home, surviving the Houtman Rocks is the least of their worries.

As they battle to survive and the bravest and the best reveal themselves for what they are, Cornelia’s only hope is a mercenary in a torn coat who shows her that a man is more than just manners and money.

He makes her one promise: ‘Even if God forsakes you, I will find you.’

But can he keep it?

Described by one critic as ‘Jack and Rose in the seventeenth century’, East India will keep you wondering until the final page.
Labels: Australia Dutch Falconer Indies novel review ship shipwreck