Review of "Morocco, maybe" - a young corporate lawyer joins a group touring Morocco and starts to doubt her life 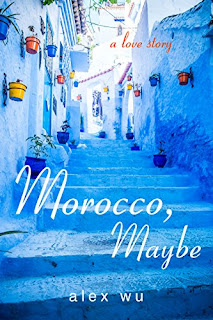 For those who ever visited Morocco and did the "Royal cities"- tour around the country this book is a feast of recognition as we say in Dutch. But the book offers so much more.

Sara is a young corporate attorney who ruthlessly goes for the kill to further her career. In this case to stop an archaeological dig in Afghanistan so her client a Chinese mining corporation can start mining.

But when she attends a charity function with her fiancé Nathan it is clear that her life is very "empty". She is the only one who takes the time to go and look at the artwork from Afghanistan, the rest is discussing golf. Her fiancé does not bother to have a look even when Sara used to study Art and he must know it is something that hugely interests her. There is only one other person interested in the art, a handsome man. He advises her to bid on the trips in the auction and that is what she tells her fiancé Nathan to do. To be flabbergasted that the guy she chatted with at the art exhibit  turns out to be the guest speaker at the event and the leading archaeologist at the dig she tried to shut down by having him expelled from Afghanistan.

"He can dig for my treasures any day", a woman quipped at the nearby table.
"I got some relics for him to uncover," said an older brunette in a prim dress.
Other women joined the drunken chorus to sing fresh praises for the archeologist. Ridiculous. I heades to the gallery, leaving the brouhaha behind.


Nathan wins a trip for two for them to Morocco but then at the last moment decides it is better to stay home to do something for his work. Pissed off Sara decides to go to Morocco alone. The very expensive arranged tour however is full with the same boring types as attended the fundraising.

Then the spot of Nathan is filled by Kai. Kai the archeologist. It takes him however just a day to decide he rather continues as a backpacker with an old friend and they ask Sara to tag along. Causing a complete cultureshock on her part.

So far you will think this book sounds like a romance novel for women but it has more to offer.

First of all it gives a very recognisable idea of the mayor Moroccan touristic spots. I really enjoyed that as I toured the country in 2005 a bit along the same route.

But second of all at the second half of the book it suddenly turns very serious. How to cope with a tremendous loss? Should one try and be loyal to someone or follow your heart? Can you just throw away all you worked for? It had me in tears.

For someone in the legal profession with a love for history and once a ton of grief it was quite close to home.

I can really recommend it!

Just 99 cents on Kindle so what are you waiting for? Just click on the picture below.

Sara Meadows is an ambitious attorney who helps her mining-company client make billions, even if she has to bulldoze an ancient monastery and blackmail the opposition. Unsavory, true, especially since she once dreamed of a PhD in art history, but soon she’ll make partner at an elite firm. Not bad for someone raised on food stamps. A vacation to Morocco shouldn’t screw up anything.

It screws up everything.

Backpacking through Morocco, Sara meets an archaeologist who seems everything she is not: idealistic, spontaneous, and as down-to-earth as his digs. They explore fabled kasbahs and medieval medinas, sharing tales under Saharan skies. Over sips of mint tea, the two discover a mutual passion for history. And fall in love.

Sara’s newfound happiness would be perfect but for one tiny detail: the priceless monastery she’s demolishing is the same one the archaeologist is desperate to save. Navigating unexpected detours is hard enough. Betraying someone she loves is harder. The hardest part? Mustering the courage to defy her head and follow her heart.