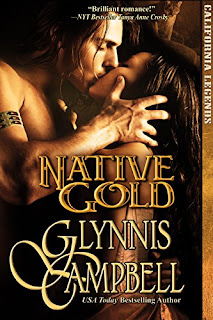 Orphan Mattie, from upperclass Boston, travels West to meet her mailorder bride husband-to-be who is a doctor in a small mining town. However upon arrival she learns the man kicked the bucket just one day prior. So Mattie inherits his hut and tries to fend for herself. The miners are a rough but goodhearted bunch what made me think of the story of Snowwhite and the 7 dwarves somehow.

While in Paradise Bar she meets two Native American, Indian, brothers. One a small boy, the other a mighty hunter. Well you can guess what happens next.  She falls in love.

It was a nice light-hearted read over Saturday when I was tired.

However the cover picture is incorrect as Mattie has straw blonde hair and is a white woman.

A unique love letter to the Gold Rush town of Paradise, California!
CALIFORNIA LEGENDS...These are chronicles of the Old West--of the native people who lived on the land for generations and the pioneers who came from all over the world in search of riches…the struggle to survive in a land without laws…the strange bedfellows that resulted from the clash of cultures…and the common language of the heart that spoke of a love more precious than gold.
NATIVE GOLD: Book 1Mathilda Hardwicke, a rebellious artist rejected by her family and New York society, heads west to Gold Rush California to make a new life for herself as a mail-order bride. When fate leaves her at the altar in Paradise Bar--a ramshackle gold camp full of ragtag miners--she's sure she's leaped out of the frying pan and into the fire.

But unbeknownst to Mattie, she has a protector. Sakote, a fierce Konkow warrior, is bound by honor to watch over the white woman. And though his tribe is threatened by the encroaching miners, he's strangely drawn to Mattie, who delights in making pictures of him and whose destiny seems entwined with his.

When a tragedy at the camp forces Sakote to steal Mattie away, she finds herself in an unfamiliar Paradise of savage wonder, and she soon discovers a forbidden love more precious than gold.
Book Details