"Silk Road" - a Templar and a monk travel east to the Mongol Khan to broker a deal against the Muslims. 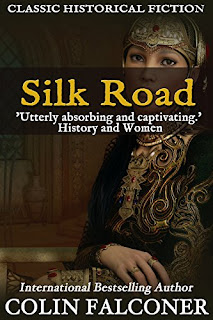 Some books make you think about them long after you have closed the cover (or your Kindle App). This is one of those:

The story starts with a monk on his deathbed. He tells the abbot about his life and when the abbots leave he has the feeling the devil passes him in the hallway to come and collect the soul of the evil monk.

"The Holy Land, 1260. Josseran Sarrazini is chosen to escort the Pope’s emissary on an embassy to the all conquering Mongol horde in an effort to save all Christendom form destruction. But although he serves as a Templar warrior, Josseran is not all that he appears to be - and he despises the Pope’s man on sight.

Now they have to spend nine months in each other’s company on the most dangerous and most inhospitable journey on the earth - across the legendary deserts of Persia and the horrific black hurricanes of the Taklimakan, along the Silk Road to Khubilai Khan’s legendary capital at Xanadu.

When he sets out, Josseran cannot know then that he will never see Christendom again.

And somewhere near the Roof of the World a Tatar princess, possessing a gift for prophesy, refuses all her suitors and defies her father’s attempts to marry her off to the sons of other tribal chiefs. She does not belong in her world any more than Josseran belongs in his.

And now fate will bring their paths on a collision course somewhere on the Silk Road and change the course of her own life forever.

From the Storehouse of Winds to the Palace of Myriad Tranquillities, over the Pamirs and Hindu Kush to the legendary Xanadu and the dazzling court of Khubilai Khan. This is romance and adventure on a breath-taking scale."
AMAZON

My first thought was that it reminded me of Turandot the opera where a princess also dismisses all her suitors because they cannot best her. In that case by not solving riddles, in this book by not outdoing her in martial arts.

I read somewhere that the writer started writing again with this book after a black period in his life. I have the feeling that might have to do with the death of his wife. There is a very poignant scene in the book where the only convert the Christians had made in China is calling out for God to help her and instead dies horrible sentenced to be killed by her own baby. That chapter had me sick. It was too horrible. I laid awake for hours. But looking at the whole book the whole bottomline is that the one who is spreading religion is utterly evil and has many deaths on his conscience. He is not at all what one would expect from a disciple of Christ. But the scene where God seems to refuse help made me wonder if that had it's origins in a personal experience of the writer with an illness what was fatal for someone near him. That he had lost faith himself. Thing is it had me reflect on my belief in God for days.

All in all it is a very interesting novel that tells us a lot about that time in history but also about the landscapes the caravan travels through. And it introduced me to the Mongolian culture of those days. Happy not to live then though. People are extremely cruel in the novel. Life seemed to be worth nothing and family members desert their own kind. Oh and the monk - hell would have been too good for him.