An impressive book about the scars of WW2: review of The women of the castle 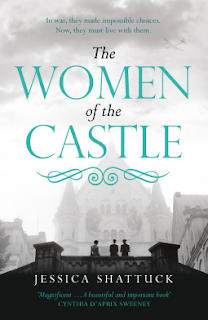 (By The publisher) Bavaria, Germany. June, 1945.
The Third Reich has crumbled. The Russians are coming. Can Marianne von Lingenfels and the women in her care survive and build their ravaged world anew?
Marianne - widow of a resistor to the Nazi regime - returns to the grand, crumbling castle where she once played host to all of German high society. She assembles a makeshift family from the ruins of her husband's movement, rescuing her dearest friend's widow, Benita, from sexual slavery to the Russian army, and Ania from a work camp for political prisoners. She is certain their shared past will bind them together.
But as Benita begins a clandestine relationship and Ania struggles to conceal her role in the Nazi regime, Marianne learns that her clear-cut, highly principled world view has no place in these new, frightening and emotionally-charged days.
All three women must grapple with the realities they now face, and the consequences of decisions each made in the darkest of times . . .
.
(My Review)
I was very impressed by this book. The story starts during a party on Burg Lingenfels in the late 1930-ties. The husband of Marianne von Lingenfelt, her childhood friend Connie and some others decide after long deliberations to overthrow Hitler because they see him as evil. That is the only moment I have doubts about the book as the guys join the Von Stauffenberg putch but that takes place in 1944 so why wait that long?

Marianne, flat chested and bony, is married to her old university professor. She seems to have a happy marriage but it seems more a good partnership than a passionate love affair. During the party at the beginning of the book Connie kisses her and I believe this man is the love of her life. Someone she was in love with as a teenager but who never noticed her as more than a friend she thought. And then he kisses her like that and introduces her to his pregnant fiancee Benita a beautiful young girl and she wonders what to think of it all. Reading the book we learn that he always called Marianne The judge and said to Benita Marianne could be so cruel. What has Marianne wondening why.

Then the story jumps to 1945. The husbands are all executed and Marianne sets out to find Benita and Connie's son. They are joined by Ania another widow who hides a secret. The women try to survive in the ruined castle dealing with famine, former Nazies and raiding Russians.

The book ends in 1991 and a very old Marianne is asked to speech at a book presentation in Burg Langenfels that is now a New Age, human rights center. Marianne realises that she is unworthy of all the praise. That she was indeed a harsch judge all those years ago who put herself on a moral high horse and time has come to forgive and be forgiven. Meanwhile the daughter of a Nazi and the son of the man executed by the Nazies make love.

To prevent spoilers I cannot delve too much into the story but I was very impressed by this book. The story deals with all the muddy details of the war and the time after the war. Like one of the children was in a Nazi-home but thinks back kindly to the lady who ran it. It reminded me of my elderly neighbour who worked in Germany as forced labourer but called the farmer Mutti (mother) and even years after the war when he was married would go to visit the old German woman. Landowners getting shot by advancing Russians, the rapes, the bombed out houses, the refugee trails, the movies showing concentration camps, the youth camps of the Nazies when they were still fun, the moments that people realise mass killings take place, the condemnation of people who did not do wrongs, the ways people try to pay for their sins or not.

It is a book you cannot stop reading and then you will think about it for days afterwards.
op 00:11:00