The three novels follow a workingclass family living in or near Cordoba in the heydays of the Caliphate. Their lives are intermingled with the lives of the ruling family. 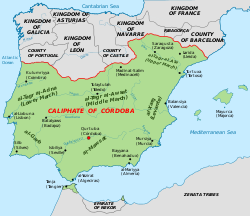 The Caliphate of Córdoba  was a state in Islamic Iberia along with a part of North Africa ruled by the Umayyad dynasty. The state, with the capital in Córdoba, existed from 929 to 1031. The region was formerly dominated by the Umayyad Emirate of Córdoba (756–929). The period was characterized by an expansion of trade and culture, and saw the construction of masterpieces of al-Andalus architecture. In January 929, Abd-ar-Rahman III proclaimed himself caliph (Arabic: خليفة) of Córdoba in place of his original title, Emir of Córdoba (Arabic: أمير قرطبة 'Amīr Qurṭuba). He was a member of the Umayyad dynasty, which had held the title of Emir of Córdoba since 756. The caliphate disintegrated during a civil war (the Fitna of al-Andalus) between the descendants of the last caliph, Hisham II, and the successors of his hayib (court official), Al-Mansur. In 1031, after years of infighting, the caliphate fractured into a number of independent Muslim taifa (kingdoms). (https://en.wikipedia.org/wiki/Caliphate_of_C%C3%B3rdoba)

The first book "THE SHINING CITY" introduces us to German Isolde whose village is raided by the Vikings and she ends up being sold as a slave in Medina al Sarah, the new capital built by the Caliph a day's journey from Cordoba. While she is being auctioned young Omar, the son of the potter, sees her and falls madly in love with her. His need to see her again and if possible run away with her endangers not only them but his family and friends.
While this girl sold into a harem is a familiar Orientalist theme here I think it is used well because we get to see the Caliphate through the eyes of a stranger to it like us. While at the same time we will see how Omar's family and friends live their day to day lifes. Like his soldier brother - Al Jundi - who goes on a campaign with the son of the Caliph and saves that man's life. As a reward the Caliph makes him personal bodyguard.
That son is I think someone I would have liked to know. A very good general who however was way more interested in his big scientific library and who was gay.

In the second book "THE EYE OF THE FALCON" 11-year old Al-Hashim, the grandson of the Caliph in book 1, wakes up to the news his father al-Hakim has just died. His mother queen Subh sets up a regency with her lover and righthand man (and some others in the beginning) to rule while he is not of age. A time of court intrigues starts and young Al-Hashim is alone and forgotten in the palace in Medina al Zahra while court has returned to Cordoba.
Al Jundi realises how lonely he is and introduces the boy ruler to his own son Ahmad who is training to be a falconer. The boys bond over the birds but then something becomes clear that will separate them.
In flash backs we will get to know more of the past of queen Subh. As a Christian slave she is placed in the harem of the heir of the Caliph. Al Hakim is a nice person but no matter how well the girls dance he only speaks with them out of politeness and then sends them away. The girls do not realise the prince is homosexual. His mother does and he needs an heir so she picks young Subh who looks very boyish and hopes her son can fool himself in believing Subh, who they cloth and rename as a boy, is a man. They hope to arouse him that well that he will be able to get her with child. That project works and to everyone's surprise al-Hakim and Subh become the best of friends.
This is a book around the court intrigues of Al Mansur the regent. As I know about those historical events it was less interesting to me as I knew what was coming.

In the third novel "THE RING OF FLAMES" the falconer Ahmad, his brothers Qasim the doctor and Rafiq the soldier are middle aged men and fathers. Al Hisham the Caliph lives forgotten in his palace. The dictator al Mansur has died and his son is more or less the ruler.
Ahmad's daughter, her Jewish best female friend Rachel and her friend from England, a monk, work together in the big library of Cordoba where they copy books.
Then the city becomes under siege and Ahmad has to save his family and their friends.
Personally I liked this one best. It makes clear how multicultural this society was. Muslims, Jews and Christians and also the Berber immigrants from Morocco. The fact that women went to university and worked. The quite modern hospitals and libraries. But also the shaky security system with dictators and invaders. Where your head could end up on a stake. It was interesting to read how warfare was done in those days. How people survived sieges. I can really recommend the book.

All books can be easily read as stand-alones.