The attraction of spanking - Review of "The Hand of Vengeance" 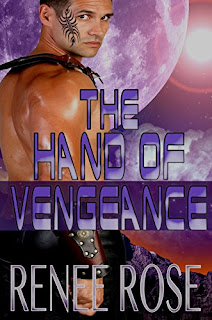 When I attended a legal conference this week one of the lawyers asked what book I was reading now as she always reads the reviews I put on Linkedin. So I explained that I was writing them for the NedGalley-site but that I was now reading one that had so much sex scenes in it I would not dare to put that one up on my Linkedinprofile. She smiled widely and said; "O but there is nothing wrong with reading a book like that once and awhile because they can be fun." And I have to say this book is a fun read.

Doctor Lara Simmons works in a kind of Doctors without Borders capacity on an alien planet where rebels are fighting the Republic. In the midst of an operation she is abducted by a band of rebels so she can operate on some important figure of the revolution. Lara ends up trekking the countryside with Blade, a rebel commander who is quite famous as he is a slave who regained his freedom. While she is used to civilisation on earth with gender equality this planet and its inhabitants are a lot more wild. Whenever she does something against Blade's orders she ends up on his knee for a spanking or gets caned but apart from that he takes good care of her. They have to reach the person she is supposed to save and Blade wants to overthrow the government. In the meantime a part of Blade ends up in all of Lara's entrances.

It is a fun read but I have to admit I fail to see what is hot when a guy canes your behind. I would knock him out instead of kiss him :)

ON AMAZON
" ON HIS PLANET, WOMEN ARE PUNISHED WHEN THEY DISOBEY...
Dr. Lara Simmons can handle difficult surgeries on the battlefield of a war-torn planet. She can even handle her capture by rebels who need her skills to save the life of an important figure-head. But she wasn't prepared for being stuck out in the wilderness with Blade Vengeance, the fierce tattooed rebel warrior with antiquated views of gender roles and corporal punishment. Dominant and unyielding, he doesn't hesitate to take her in hand when she disobeys his rules. Yet he also delivers pleasure--with a passion she's never before experienced.

Blade finds the doctor from Earth sexy as hell, especially when she's giving him attitude, but once he delivers her safely to headquarters, he pulls back from her allure. Known for single-handedly starting the revolution and freeing many of his people, his life is one of hardship, slavery and war. Going soft on a woman isn't part of his plan, especially with the final strike of the revolution so close. But when he sends Lara back to Earth to keep her safe during the upcoming battle, he inadvertently delivers her into enemy hands. Can he find and save her from the revolution he caused?

Publishers Note: This power exchange story contains dominance and submission, spanking and explicit sex scenes. If such subject matter offends, do not buy this book."