(P)review of "Reservations ( A Lola Wicks Mystery) by Gwen Florio 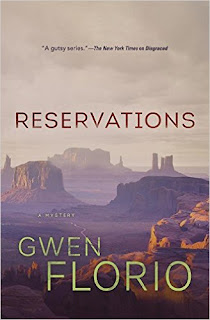 "The day that would see Ben Yazzie transformed into shreds of flesh in too many evidence bags began with a rare strong and satisfying piss. Bem leaned back against the stream, a veritable Niagara, not his usual dribble and hitch that put youth farther in the rear-view mirror every day"

This is the opening of the novel to be published in March 2017 and which NetGalley asked me to review.

From the opening you are hooked....

Lola is a former war correspondent who now lives with her Indian Blackfeet husband, the local sheriff, and their daughter in Montana. Her husband Charlie wants to go on a belated honeymoon all the way to his posh brother Edgar who lives nowadays in Arizona with his Navajo-wife Naomie.

While they are exploring the tourists sites of the Navajo reservation one tribal elder, Ben Yazzie, is blown to pieces by a bomb that seems to have been aimed at a billboard of the local mine. This mine is hurting the environment of the mesa, turning the water poisonous and driving people from their homes but on the other hand is the main source of employment in the rez. Then the next bomb explodes....

The writer has a beautiful style of writing and the book is a real pageturner. It is not only a very well written mystery but also sheds light on the living conditions in the reservation and Navajo culture and makes you almost see the tourist sites yourself.

What she is also good in is making you bond with Lola. You can feel her unease to have to spend time with a brother in law who does not like her and an almost perfect sister in law. You can feel her love for her daughter and her husband. I hardly ever weep reading a book but I did with this one.

Really recommend it: a 5 out of 5 stars

AMAZON:
"Journalist Lola Wicks would much rather pursue a story than spend time with people she barely knows. So when an eco-terrorist bombing escalates the controversy surrounding a new coal mine on Arizona's Navajo Reservation, she's almost relieved to have the distraction from meeting her in-laws.

But as the violence gets worse and Lola digs deeper, she can't escape the feeling that her husband's family is somehow involved―a suspicion that jeopardizes not only her marriage, but also her life.
Praised by the New York Times as "a gutsy series," the Lola Wicks mysteries captivate readers with compelling characters, gritty tension, and page-turning action that builds to a thrilling finish."