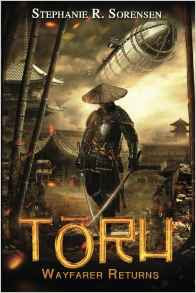 (A review written for the NetGalley-site). According to Wikipedia steampunk is "a subgenre of science fiction or science fantasy that incorporates technology and aesthetic designs inspired by 19th-century industrial steam-powered machinery".  The novel "Toru Wayfarer returns" by Stephanie R. Sorensen offers us an alternative version of Japanese history beginning just before the Americans try to open Japan to the outside world.

Under the rule of the Shogun Japan was closed to the outside world. On March 31, 1854, Commodore Matthew Perry and the "Black Ships" of the United States Navy forced the opening of Japan to the outside world. The novel starts around a year prior to that event. Toru has spend a few years in America and is trying to sneak back into Japan to warn his fellow countrymen for an invasion by the West and to urge them to prepare and update their military technology. He however gets caught by the men of a minor daimyo, a nobleman who rules a certain part of the country. Toru claims to be the son of a fisherman whose survived a shipwreck that saw his father drown. But later on it becomes obvious there is more to that.

The punishment for returning to Japan is death but the nobleman first allows him to say goodbye to his mother who he discovers left the village upon hearing he and his father drowned. Then Toru bit by bit succeeds in convincing the daimyo and his more mighty neighbour to use modern technology and build railroads and zeppelins. But the moment the Shogun will hear of that it will mean the end of them.

Somehow the author spends more time in describing how a railroad car is build then in describing Japan. I really do not have a click with technology and need a friend to change my lightbulbs so that did not really make me feel warm and fuzzy. The last part of the novel sees more action.

I think this is an excellent book for someone interested in technology.

3 stars out of 5. And I am wondering if there is not an error in the story of his mother.

ON AMAZON:
Revolutionary young samurai with dirigibles take on Commodore Perry and his Black Ships in this alternate history steampunk technofantasy set in 1850s samurai-era Japan. In Japan of 1852, the peace imposed by the Tokugawa Shoguns has lasted 250 years. Peace has turned to stagnation, however, as the commoners grow impoverished and their lords restless. Swords rust. Martial values decay. Foreign barbarians circle the island nation’s closed borders like vultures, growing ever more demanding. Toru, a shipwrecked young fisherman rescued by American traders and taken to America, defies the Shogun’s ban on returning to Japan, determined to save his homeland from foreign invasion. Can he rouse his countrymen in time? Or will the cruel Shogun carry out his vow to execute all who set foot in Japan after traveling abroad? Armed only with his will, a few books, dirigible plans and dangerous ideas, Toru must transform the Emperor’s realm before the Black Ships come. Toru: Wayfarer Returns is an alternate history steampunk technofantasy set in 1850s samurai-era Japan and is the first book in the Sakura Steam Series, an alternate history of the tumultuous period from the opening of Japan in 1853 to the Meiji Restoration in 1868. Readers who enjoy steampunk alternate histories more typically set in Victorian England or the American Wild West may enjoy this steampunk story made fresh by the Japanese samurai setting, as well as readers who enjoy historical fiction set in Japan.