Amazon Summary: North Africa, 1067. Kella is a girl disguised as a boy, travelling the trade routes and beating all comers in the camel races. When her true identity is revealed, she is sent home to the family desert camp to be taught women’s skills. But Kella yearns for her freedom and the excitement of life on the road and when a mighty army sets out on a holy mission, she risks marriage to its general, Yusuf. While Yusuf conquers the whole of North Africa, Kella finds herself a rival to his infamous queen consort, Zaynab, a powerful and jealous woman. Can Kella protect herself and her newborn son? Can she find the freedom she craves as well as love? Second in the Moorish Empire series, this is a new take on a dramatic period of history.

My review:  When you are interested in the history of Morocco but like it told in a good novel this is the book for you. The setting is the founding of the Almoravid dynasty.

The Almoravid dynasty was an imperial Berber Muslim dynasty centered in Morocco. It established an empire in the 11th century that stretched over the western Maghreb and Al-Andalus. Founded by Abdallah ibn Yasin, the Almoravid capital was Marrakesh, a city the ruling house founded in 1062. The dynasty originated among the Lamtuna and the Gudala, nomadic Berber tribes of the Sahara, traversing the territory between the Draa, the Niger, and the Senegal rivers.
https://en.wikipedia.org/wiki/Almoravid_dynasty 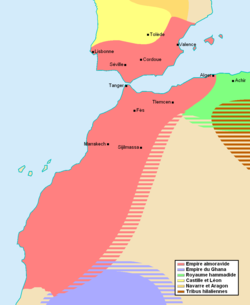 Yusuf, his cousin Abu Bakr and Zaynab are all historical figures and are important figures in the conquest of the Mahgreb by the Almoravids dynasty.

The earliest reference to Zaynab is in the anonymous 12th-century text Kitab al-Istibsar, where it says "In her time there was none more beautiful or intelligent or witty ... she was married to Yusuf, who built Marrakech for her"
Her example and the fact that she assisted in creating the dynasty and its customs had great impact on the situation of women in Almoravid Morocco. In the tradition and example of her, women in Morocco had high status during the reign of the Almoravid dynasty; princesses was allowed to participate in state affairs; women in Morocco did not wear veils; the education of women was accepted and normal, with notable women such as Hafsa Bint al-Hajj al-Rukuniyya holding courses for the women of the palace; at least two women known to have been doctors, and, finally, princess Fannu famously participated in the defense of the capital during the dynasty's downfall in 1147 (Wikipedia)

"Zainab was praised for her matchless beauty as well as her skills in governance matters. Though many women lived in the shadow of their husbands at that time, historians report that Zainab Nafzaouia was highly influential in the process of decision making especially in public affairs.
Lotfi Bouchentouf de Zamane reports that Zainab Nafzaouia  has repeatedly intervened in politics. For instance she urged her husband Yusuf Ibn Tachfin to change his status from a mere deputy of Abu Bakr to the title of “Amir al Mouminin”, the prince of believers.
Women living under the Almoravids rule were relatively emancipated in public life. They held a prominent role in society as they were entrusted with governance issues in their households."
https://www.moroccoworldnews.com/2012/09/56284/zainab-nafzaouia-legendary-queen-of-the-almoravid-dynasty/

Yusuf is portraited in history as a wise and fair man.

In this novel Zaynab is portrayed as a woman who sleeps herself to power and who is terribly jealous. Well the first part seems to be true as she keeps marrying another candidate who seems to qualify for the ruler of the Maghreb but if she was a bad person we will never know.

I think the fictional Kella is described in a genuine way: a girl who saw a lot of the world as a child and teenager and who suddenly is confined to the role of a peasant woman in a camp and who yearns for freedom and travel will be fascinated by a general with a vision to conquer the world. Yusuf seems to be the kind of man who is attracted to smart women who share his vision. But where Kella is a young nomad girl Zaynab is the older and experienced woman and he falls madly in love with her.

I do not agree with the end conclusion in the book on their relationship and the relationship Kella has with her friend from home. Because the book is very detailed apart from the sexual relationship Kella has it is a bit difficult to fathom how intense their bond is. I think Kella was besotted and yes Yusuf was more feeling tenderness towards her while he seems madly in love and under the spell of Zaynab. But the other relationship seems only to me to be love from one side. The ending feels a bit too convenient.

The book is very entertaining and keeps you guessing which of the women will prevail. The story seems to be a romance but towards the second half it is more about the founding of Marrakesh and the power struggles in the new realm. For someone who likes history it was a nice way to get acquainted with Moroccan / Maghreb history of that era.

The title by the way is a reference to the jewellery Kella wears as a Touareg woman. Every chapter is named after an item of  traditional jewellery that is given for certain occasions. The string of silver beads is the only present Kella can give to someone she loves very much.