Review "Fletcher's Fortune" - a navy story with a detective aspect

At the end of the 18th century an orphaned bastard  is set to inherit a fortune without knowing it. His half brothers and their mother want him dead. He ends up presses into the navy but it seems his enemies still know how to reach him.
Good story but the ending  is unbelievable. 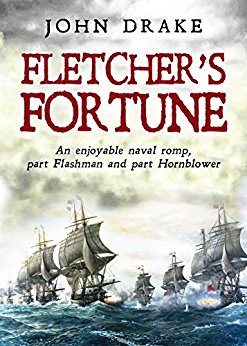 Young Jacob Fletcher, whilst unsure of his parentage, did know that as an apprentice he couldn't legally be seized by the press gang.

But this particular gang couldn't actually read the rules. And didn't care anyway.

Which was how he found himself risking life, limb and sea sickness on board His Majesty's frigate Phiandra, about to do battle with what looked like half the French fleet.

Meanwhile at Coignwood Hall, the late Sir Henry lay face-down in his soup as his beautiful but evil widow, Lady Sarah, along with their two loathsome sons, ransacked his papers for the will that would disclose to their horror that the entire family fortune has been left to a previously unknown illegitimate son.

Who would now have to be tracked down and disposed of as a matter of some urgency...

What will become of Fletcher's Fortune?

Fletcher's Fortune is the first in a rollicking series of memoirs that bring the 18th Century back to life in its tawdry glory.

When you wonder how to read a Kindle book from the US? Just download the Kindle App on your phone or pc. And pay attention: compared to Dutch prices you pay like 15%
op 20:19:00