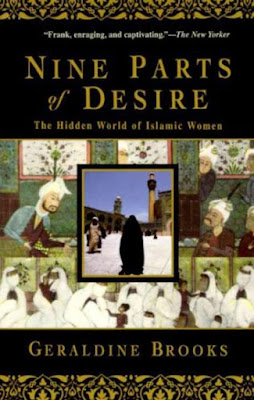 As a prizewinning foreign correspondent for The Wall Street Journal, Geraldine Brooks spent six years covering the Middle East through wars, insurrection, and the volcanic upheaval of resurgent fundamentalism. Yet for her, headline events were only the backdrop to a less obvious but more enduring drama: the daily life of Muslim women.Nine Parts of Desire is the story of Brooks' intrepid journey toward an understanding of the women behind the veils, and of the often contradictory political, religious, and cultural forces that shape their lives.(Bol.com)

The book is written in 1996 many years prior to the Taliban, 9/11 and the invasion of Iraq. It is an interesting book and easy to read. The chapters are all around one theme  and cover many themes and a couple of countries: the wives of the Prophet, polygamy on the West bank, the widow and daughter of Ayatollah Khomeiny, temporary marriages in Iran etc.

Some things make you smile as when she barges into a bedroom of a fellow attendant to a women's conference who she has only seen in chador to meet a woman clad in a see through negligee with bleached blonde hair and at first think she made a mistake with the roomnumber. I remember a bit of the same experience that happened to me at an asylumseeker centrum where one lady was always sternly covered in a scarf but once in her room had changed into a classic French chic woman.

Sometimes one wonders if the outsider look of the writer did draw the correct conclusion. Like when she discovers her fellow conference attendee is a vamp under all her covers and the lady explains that the Iranian women make themselves beautiful for their husband and the writer thinks back on meeting mrs Khomeiny after her husband's death and discovers the grandmother in her seventies is hiding a load of carrot red dyed curls under her chador that show grey roots because she has not dyed them after her husband's death. One of my friends died young and his mother and wife did not dye their hair not because he could not see it anymore but as a sign of mourning.

Nevertheless: interesting book - 5 stars out of 5

Oh and this is what the title means:  "God created sexual desire in ten parts; then he gave nine parts to women and one part to men."

You can buy in in Holland at Bol.com or worldwide at Amazon. Advertising buttons will appear below. Bol is slow.