A book about the fall of Palmyra in Syria written by a Syrian-Polish writer. 12+ 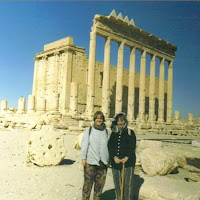 In 1999 I visited Palmyra in Syria. It is an oasis town in the middle of a huge desert. Fabulous ruins were everywhere. A huge castle overlooking the town. The temple of Baal (remember from the Bible) still standing. What I noticed were the very friendly people living there. Many surprisingly redhaired with blue eyes. I was told that when the Romans conquered the town it was left empty till the ancestors of the people living there in 1999 came to the town  as Russian refugees in the 19th century .

Fast forward: Newspapers full of horror stories of IS in Palmyra. The curator of the museum hanged, the temple and monuments destroyed, people killed. My heart bled. All of a sudden people from that country walked all the way to mine.

Around that time I was given this book to review. It took me a bit before I opened it.

It is written by a Syrian-Polish doctor now living in the United States. The book was listed on NetGalley as a children's book but I would suggest to list it as "young adults - teenagers". It is perfect material to use in class during a history project or for Latin classes. However also for adults interested in Palmyra it is a nice read.

It’s the year 272 A.D. In the book we follow three different girls: one the daughter of the queen, one a dancer who is in love with the boy king the brother of the other girl and a servant girl working in the palace.

Palmyra is at its power zenith.  Zenobia rules from Egypt to Armenia and is at first seen as a Roman alley but then tensions grow between Rome and Palmyra.

In the end the Romans conquer the town. The three girls see their lives completely turned upside down and have to take matters in their own hands.

They grow into strong women.

The book is quite short and for adult readers it might be a bit shallow in the emotions department. I however think that might reflect the ages of the main characters. A young person probably will just go with the flow and not worry if they will love someone still when he is not a king anymore.