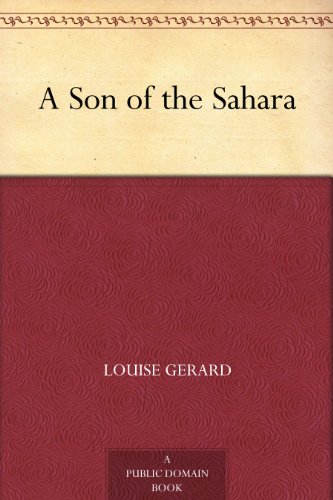 Almost 100 years ago maybe due to the movie and the book it was based on, The Sheikh, this kind of adventure stories were popular. Old book, 1922, and totally free to download A Son of the Sahara by Louise Gerard https://www.amazon.com/…/B0…/ref=cm_sw_r_tw_dp_efVtxb3RX2MH5

This one is in my opinion way better. It is the story of two people who befriend each other not knowing who the other really is. The girl is young and has inherited from a godfather a huge fortune and is unwilling to give that up and her independence, the man is in his early thirties and equally rich and posing as a French trader from Africa but only his mother was French his assumed father was a warlord deep in the Sahara. That warlord is executed by the father of the girl and the son had then sworn to kill the English officer and sell his family into slavery.


So these people fall in love with each other and then make decisions that sound weird for our 21st century ears. Why not marry? Because is those days as a woman married her fortune went to the husband and she had no right to decide for herself anymore.

What is also astonishing is that marrying someone who is half Arab/ half French is considered a shame and going native. Called "black blood" / the "black barrier" . People even talking about him as "that nigger". The fact that he is a king and has his own kingdom does not make any difference. Just not done.

Also colonization was not considered bad. Just snatching someone's kingdom from under him is done without any regret. (But hey we did that in Iraq as well with Saddam when he acted criminally - or so people thought).

What is surprising however is the stance against Islam. Nowadays you read a lot bad things about that but when the heroine scolds her lover of having a mistress while he is courting him she goes to apologize when she finds out he is a Muslim saying that it was not her right to condemn him as according to his culture and religion he had not done something bad and it was not her place to judge him. Maybe a result of living in an empire where the sun never set.

But even when the heroine decides she really loves this guy and rules of race can drop dead, it seems - just like in that Sheikh book - that it still was not something someone could write or think in the 1920 ties because here as well the guy turns out to be pure white.

Great book to read. Just keep in mind the time it was written in.
(And I did not spoil it for you writing all this as it is quite a complicated story but the writing is very modern)
op 23:18:00