Enslaved by the Barbary Pirates - Review: The Selling of Kaelyn Sullivan by Marie Hunter 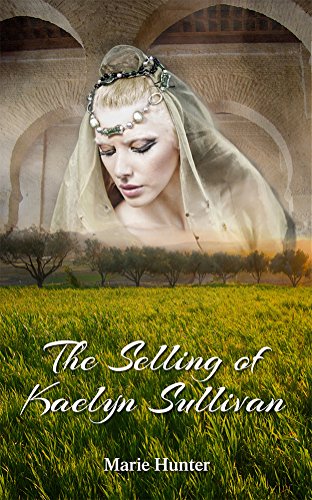 When on a family holiday in Tunesia the writer of this book and her niece are at a local market. The niece has a special kind of very dark blue eyes and a seller at the market runs home to get his familymember who has the same unique eye colour. Because of this event the writer hears about the Christian slaves who were raided from Ireland by the Barbary Pirates and sold as slaves in Northern Africa. She then wrote this book based in actual accounts of slaves.

1629. When Barbary pirates raid an Irish fishing village, Kaelyn Sullivan and her entire family are taken and sold off at the Tunisian slave market. Stranded in a strange land, despondent without her family, Kaelyn wants only to escape and return home.

Then she is sold by her owner to someone who is quite nice. In the meantime in glimpses we learn about what happened to her family members upon arrival. Some met nice people, some ended up in hardship.

The nice man, Zafar, appears to have given Kaelyn her freedom but hopes she will stay with him. She however insists she wants to go back to Ireland. At first that sounded strange to me as it is clear her whole family is in Tunesia somewhere and Zafar tries to find them and buy their freedom. Why would you want to return to a country none of your family lives anymore, where you were dead poor while you are ln love with someone, who has a lot of money and who is trying to find your kin? That had me doubting the story at first. Then realising due to all her prayers that for a Catholic girl in those days marrying a non-Catholic was a deadly sin.

What also sounded a bit like as if not fitting in the time period is the fact that Zafar feels terribly lonely as he is considered cursed so none of the local families will marry their daughters to him. Ehhh hello, I have stood in the slavemarket in Tunis. In those days a guy could buy himself a girl and that was regarded as quite normal. While here his mother badmouthes him that he can only get himself a slave.

Nevertheless a nice book. Even more because I have been on the locations it is set in. And unlike the books in this genre. Like their discussions about religion.

I could not stop reading so fell sleep at 5 am.