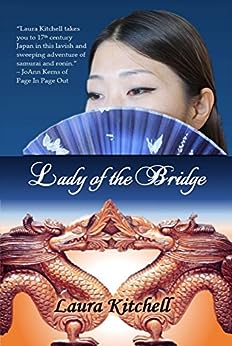 For those who have read the book Shogun or seen the series the time frame of this novel might sound familiar as the story takes place just a few years after that book. In 17the century Japan the Shogun is now the one in charge with the emperor just a ceremonial figurehead. The peace though is frail so the Shogun decides his youngest daughter will be send to court and be one of the concubines of the emperor and with a bit of luck a child born of that union will cement the peace.

The daughter princess Saiko is no withering willow but a girl who secretly trained in martial arts at her brother's court and who likes poetry and nature. One of her favourite hideouts in her father's castle is a covered bridge. One day, just a few weeks before her departure to the imperial court, she meets a samurai on that bridge. They start talking and from that day onwards meet each other every day at that bridge. She does not tell him who she is as she is afraid he will shy away from seeing her. That is why he calls her "The lady of the bridge."

Before they know it they are in mortal danger.

The book is a bit slow at first with a lot of talk about the art of poetry and painting and when you are not familiar with Japan that does not ring that many bells. But the moment things spring into action you want to keep reading and reading.

What I like about the book is the solid cultural background. Unlike in many romance stories where the heroines choose a destiny that is complete alien to the time they lived in or their culture in this book I had never the feeling something was not correct.

It is a good book to read. I can recommend it. What might be helpful is a dictionary at the beginning of the book for those like me who do not know that much of Japan. Having read Shogun 20 years ago though helped.