A group of soldiers travel the desert after their officer is shot. Review of "Patrol" 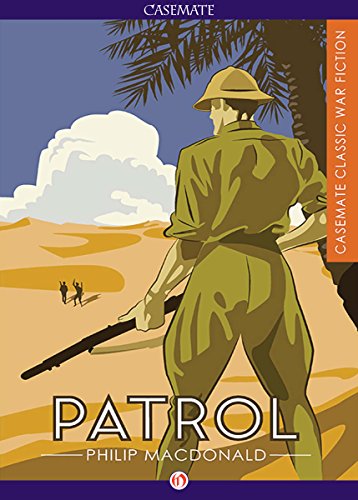 A group of soldiers travel the desert after their officer is shot. The next morning they find out the ones standing guard were attacked and the horses have disappeared. I can imagine a story like this would make a great movie. But as a book I lost track of all the different characters. Who was who? And the painting of their background made the story so slow. I can imagine though that a (former) soldier might like it.

The novel that inspired John Ford’s The Lost Patrol: A band of World War I soldiers fights to survive in the desert after their leader is shot and killed.

In the Mesopotamian desert during the First World War, an unseen enemy guns down the leader of a British parol. The officer was the only one who knew their orders, and he did not told anyone else where they are located.

Now the sergeant must lead his men through a hostile desert landscape full of invisible Arab snipers. One by one, they are being picked off, and the group of diverse men with different backgrounds must try to come together in order to survive. The decision-making process proves far from easy as tensions and prejudices from their former lives come to a head.

The basis for films by Walter Summer and John Ford, this bestselling novel is a suspenseful tale of the Great War for readers of Robert Graves or Ford Madox Ford—or anyone who enjoys an action-packed war story. Author Philip MacDonald, who served in Mesopotamia with the British cavalry, went on to become one of the most popular writers of thrillers and detective fiction.