Bookreview: "The tenth gift" A woman is abducted to become a slave in Morocco in the 16th century. In the 20th century a descendant retraces her story. 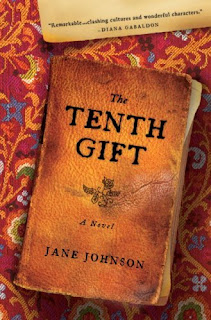 A year ago I read a book written by a British lady who explained she had written a prior novel about white slavery in Morocco and when she was doing research in Morocco she fell in love with a Moroccan guy. When I saw that this earlier novel was for sale I bought it. Reading I discovered that the story started in Moosehole in Cornwall. Moosehole the place one of my Facebook lived. So I mailed her and Sue said: "I know. I know the lady and her Moroccan husband." Talking of living in a small world.

That small world is also a theme in the book itself. The leading lady is given a book by her boyfriend on the evening of him breaking up with her. Reading is she discovers notes in it written in the 17th century by a young woman from Cornwall. It turns out a whole village was taken slaves by the corsairs from Sale, the Barbary Pirates. The book itself was found in the cottage of a friend of hers. Wanting to know more she takes a plane to Morocco and tries to find traces of what she thinks is her ancestor.

The book is not the most easy read at the story is told by the slave girl, her fiancée and the 20th century woman who reads the book. It is like a puzzle of intertwining stories. A lot of background informarion is weaved into the tale.

A very good book. I really can recommend it.

In an expensive London restaurant, Julia Lovat receives a gift that will change her life. At first glance it is a book of exquisite seventeenth-century embroidery patterns belonging to a woman named Catherine Ann Tregenna. Yet in its margins are the faintest diary entries; they reveal that “Cat” and others were stolen from their Cornish church in 1625 by Muslim pirates and taken on a brutal voyage to Morocco to be auctioned off as slaves. Captivated by this dramatic discovery, Julia sets off to North Africa to determine the authenticity of the book and to uncover more of Cat’s mesmerizing story. There, in the company of a charismatic Moroccan guide, amid the sultry heat, the spice markets, and exotic ruins, Julia will discover buried secrets. And in Morocco—just as Cat did before her—she will lose her heart.

Set almost 400 years apart, the stories of these two women converge in an extraordinary and haunting manner that will make readers wonder—is history fated to repeat itself?

A literary mystery, historical adventure, and dual love story, The Tenth Gift literally crosses genres with narrative ease and prose that is as captivating as the characters who people this unforgettable tale.