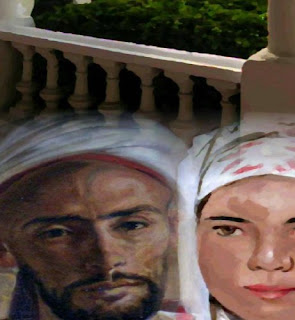 This is the story of a Christian-Muslim-Jewish extended family in Tangier in the period just before colonisation (around 1880 -1910). The Berber orphan Lily and American boy Ted are both raised in the household of the American representative in Morocco. While she at first totally turns into an American woman, her step brother who is raised with three Moroccan aristocrats feels more at home with the local Moroccan population.

"Tangier takes place in an era of civil war and political unrest as a young Sultan tries to fend off European powers interested in annexing Morocco, while bandits and pretenders threaten his throne. This is the story of Lili, a Moroccan girl raised in Tangier by the American Consul. Lili is convinced her future lies in becoming a Western woman and, despite her attraction to a Moroccan noble, she marries an American diplomat. As she watches the country fall into civil war and follows the noble, Tariq, in his resistance to its take over by the French, she realizes the strength of her allegiance to Morocco and her love for Tariq.

Lili's stepbrother, Ted, is educated in Moroccan palaces with three young aristocrats and becomes a respected journalist reporting on Moroccan issues. He must choose between his career and his Jewish wife, Meriam, who is raped in an anti-Semitic attack and rejects the country of her birth." (Amazon)

It is a good book and gives us a lot of background information. I was amazed to read that normal schools apart from the Koranschool did not exist. What also was interesting was the struggle the country went through to keep foreign invasions at bay. But a sultan who was like a boy with his toys and internal uprisings weakened the position of the country. I have seen the statue of the French general Lyautey in Morocco and was surprised to read he was gay what in those days was frowned upon. Also a famous bandit Raisuli who has his own movie with Sean Connery makes his appearence in the book.  The wife of Ted is Jewish and joins the early Zionist movement.

You can buy it here as an ebook. The Kindle App for Android is free. And when you order via this link I get points from Amazon I can use for a new book to review