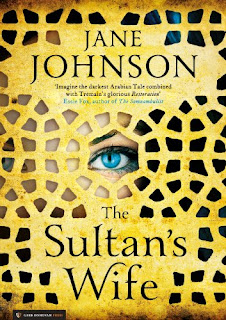 (Just 99 cents as an ebook) It is 1677 and the Moroccan sultan Moulay Ismail wants to outshine Versailles that is been built by the French king. So he plans to built a huge palace in Maknes that will rival it. The palace is built by Western sailors taken captive and now withering away as slaves. But they are not the only slaves in the palace.

We come to know the main character NusNus, a black African who is enslaved as a young man and castrated and who is now one of the most trusted eunuchs in the palace. Other people are the main architect who NusNus accompanies to London and the court of Charles the Second. This man is a great diplomat and with his (rumoured) English mother becomes the talk of London. Then there is the sultan who is brilliant but also mentally insane. One wrong look or even less can have you killed in an instant. And what about the African witch Zidana who is his main wife and who poisons everyone who she thinks will endanger her position.

One day a Dutch slave is brought to the harem and NusNus is ordered to convert her to Islam or otherwise both will be killed. This girl is meant for the mad sultan's bed. NusNus and Alys become friends and when she has a son of the sultan and thus becomes a danger to the witch queen and NusNus has been in Europe, he starts to dream of them being a family safely away from the dangers of the palace.

Do not expect a hotblooded lovestory. The man is castrated after all. It is more a historybook and it leaves you with the thought that you are glad you did not live then and there because Game of Thrones is safe compaired to Meknes in those days. But it is a great read. And I have been in Meknes. An eartquake flattened half of the buildings shortly after completion while Versaille still stands. On the other hand the French king's line ended under a guillotine while the Moroccans still have a king (but I believe from another family).


A bewitching novel set in 17th c., THE SULTAN'SWIFE is an engulfing ride to exotic Morocco, into the palace of the horrific Sultan Moulay Ismail and his `witch' wife, Zidana. From Morocco to England, the novel revolves around NusNus, the Sultan's African eunuch scribe and Alys Swan a virgin Dutch beauty kidnapped for the Sultan.

Life is but a breath short of death around the cruel Ismail who decides the fate of all those around him depending on the degree of his wrath. Zidana, on her side offers no respite- her poisonous concoctions a reminder that no one is safe from her tyrannical plans. Most important on her list of things to do is to rid Ismail's harem of all unwanted heirs (and there were quite a few- history quotes roughly a thousand!), that should surpass her own offspring.

Every day is a challenge to stay alive for NusNus who works for these two evil masters. He must also find a way to make life endurable for Alys whom he secretly loves- she in turn trusts only him. The story becomes that much more enticing when Alys gives birth to Ismail's son, Mohammed. Of course, this is a major hurdle for Zidana. But, the story then takes us to England in the court of Charles II where a twist in development will forever change the fate of all...

Intricately woven, this novel is graphically filled with suspense and intrigue- cleverly meshed in a blend of history, culture, religion and so much more. From beginning to end, The Sultan's Wife is a passionately engaging book that will keep readers frantically flipping the pages longing for more. This is my first time reading Jane Johnson's work- and it certainly won't be my last! Loved it.